It is situated in the north western most corner of West Garo Hills district. During the British administration, the former Deputy Commissioner named Halliday had his camp here while making a survey of the boundaries. Since then the place has been called after him..

Situated by the side of an important road about 25 km from Garobadha and some 60 km from Tura, the village has a police station and a weekly market. The population in 1971 was 188. 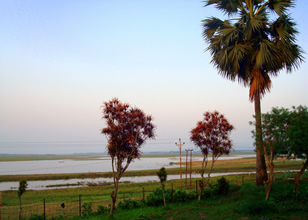 Phulbari was for long an important point of entry into the Garo Hills at the start of the Old Hills Road which bore most of the traffic before the opening of the Tura-Bajengdoba Road. Here there used to be an old temple dedicated to Mahadeb, with flower gardens within its precincts; hence the name.

Phulbari is situated in the north-western corner of West Garo Hills District. The population was 1,537 at the Census of 1971. The River Jinjiram which separates Meghalaya from Assam flows by this place. It is gradually and appreciably developing into township because of its position as a station serving several routes. There is a ferry across the Brahmaputra connecting this place with Dhubri, some 22.4 km away. The bus service from Dhubri to Baghmara which involves a ferry crossing across the Brahmaputra passes through the two States.

Phulbari has a Police Station, a Forest Office, a Hospital, a Veterinary Hospital and other offices. A cotton ginning-cum-mustard oil extraction unit which has been set up here is progressing well.

The lake known as Boro Bil is located very close to this village. It is the largest in the Garo Hills District and its Garo name, Danggachi means The Lake of Wealth, because it is believed that kings of early days used to throw their wealth into this lake. This lake which is located between Rajabala and Kalummalupara, stretches for 8 kilometres along the Tura-Phulbari Road and one can enjoy its beauty while traveling alongside.

In the rainy reason, the whole place is often flooded and with the roads under water much difficulty is experienced by wheeled transport. This lake is very famous for its fish. 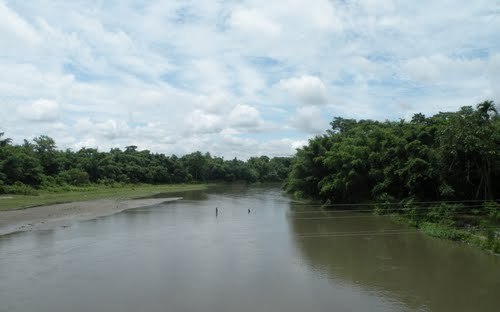 Singimari occupies an important place in the history of Garo Hills. Its was here that the British made their first entry into district. Travel from this place to Tura in those early days was usually by pony carts or bullock carts and used to take three days of continuous journey, compared with the few hours that it takes at present. The place used to be a place of call for river streamers, on their way from Dhubri to Dacca or to Calcutta.

The British Mission, with the support of the British officials, got the first school for Garos opened at this place by Mr. Valentine William Hurley in 1826. Mr. Hurley was succeeded by Mr. Fermie but the latter died before he had been there for more than a few months, and the school had to be closed down.

A motorable road connects Singimari with Mankachar in Goalpara, much of it along a causeway.

The ruins of a palace of 4th Century A.D. discovered in this village surroundings which have been once the religious centre of Buddhism and Hinduism in those days. It is an ancient township located on the left bank of the Brahmaputra flowing nearby. The excavation was conducted by the prehistory branch of the Archaeological Survey of India in the winter months of 1992 which proved it to be one of the biggest cities as a religious centre. The township was well fortified and had a large number of tanks inside. On the banks of these tanks and on other prestigious heights were located a number of burnt temples. Nearly 20 temple sites have been located along with the palatial complex and the habitational area of the ancient.

This ancient city appeared to have been destroyed and deserted owing to the devastating floods of the Brahmaputra after which the river changed its course and now shows nearly ten (10) kilometres away near Dhubri. The city consists of one mud-cum-brick Stupa, two groups of temples where ten to twelve temples are located, two water tanks of smaller and bigger sizes, a royal tank which still has plenty of water visible, where the red lotus blooms. Hindu male and female deities have recovered from the temples. An Octagonal Shiva temple is also another unique finding. Fortification of mud-cum-burnt bricks runs (5) kilometres in a circle and along the left bank of the river.

After the destruction of this city the inhabitants left the place for the interior of the district.

Wadagokgre is located on the Tura-Phulbari road along side Bhaitbari village. It is 8 kilometres from this place to Phulbari, and another commercial township in the western side of the district. It population was 316 according to the 1981 Census.

No record is a available about this ancient city in any book of Indian History. However, Capt. C.S. Reynolds in the Journal of the Asiatic Society of Bengal, Vol. XVIII (18), 1849, reported: About six miles from Bogamara, en route to Bengal Katta, are the ruins of the palace and city of the Rajah of Bissondor, which from their extant and numerous tanks still must have been a place of no small important in days long gone by. Not one brick now remains on another, of any building except two small Hindu temples, similar to those dedicated to Nursing at this place. They are still in tolerable preservation.

Although I made ever inquiry in the moffusil I could obtain no information respecting this place, except that the Rajah flourished long before the occupation of the country by the Moghuls, and was a man of great wealth and powers, who held the Garrows on complete subjection. I had no time to examine the ruins minutely but it would amply repay the curiosity of any person who would do so. I merely mention the circumstances now, that any person who travels that route again may know that such a place is in existence, and had I been aware of it I certainly should have made arrangements for halting at Goalgunge, to inspect the ruins. The route from these ruins continues over the same kind of country to Bengal Katta, which is situated on the banks of the Jinjiram, and a little below where it is joined by the Ringi River. 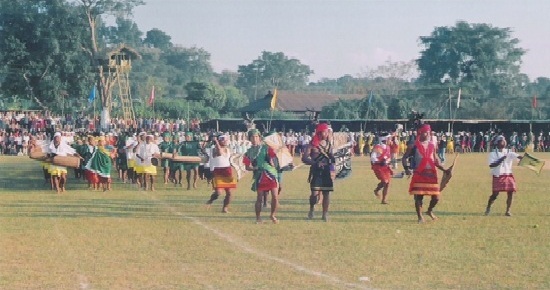 Asananggre which is located at the distance of 20 kms. from Tura is a traditional place of the Garos where the Hundred Drums Wangala Festival is organized annually by the second week of November.

Wangala is the most significant festival of the Garo Community which is associated with jhumming, a post harvest celebration that marks the end of the agriculture year. Above all and probably most importantly, it is considered to be an act of thanksgiving to Misi Saljong or the Sun God for the blessing of a rich harvest. The highlight of the festival is when 300 dancers and 100 drums descend on the field in all their splendour and hues making the festival a sight truly to behold. Other Places of interest